Most people know chicken fajitas. Many people know that it is a traditional dish from Mexico. Interestingly, however, the earliest references to the fajita came from Mexican ranch workers who lived and worked in West Texas along the Rio Grande in the late 1930s and early 1940s, making chicken fajitas actually a Texan-Mexican dish. The most popular Mexican national dish is traditionally served in tortillas.

We want to make the most popular Texmex dish a little more extraordinary and that’s why we are putting it in the shape of a cake! Curtain up for the frozen chicken fajitas in cake form, breaded and baked:

For this you need:

For the spice mix:

That is how it goes:

1. Put the cayenne pepper, salt, cumin, oregano, black pepper and paprika powder in a bowl and mix everything together. Cut the chicken breasts lengthways twice with a knife to make flat fillet slices and roll them in the seasoned marinade. 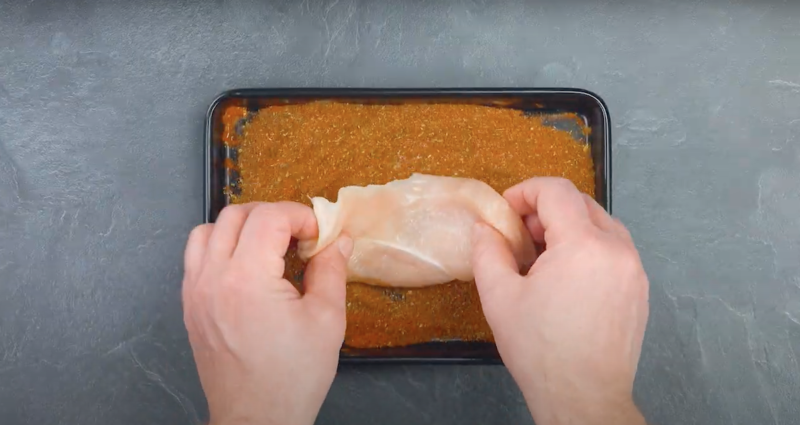 2. Cut 2 yellow, 2 red and 2 green peppers and 2 red onions into strips and fry them in vegetable oil in a pan. 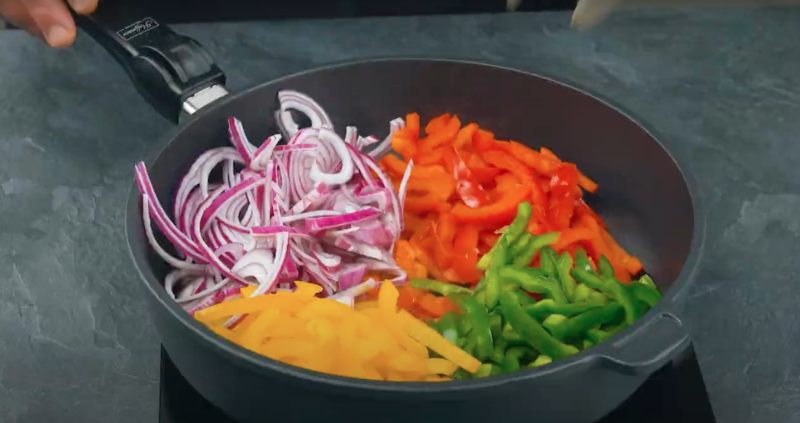 3. Line the cake tin with cling film and place a layer of marinated chicken breast fillets in the springform pan. 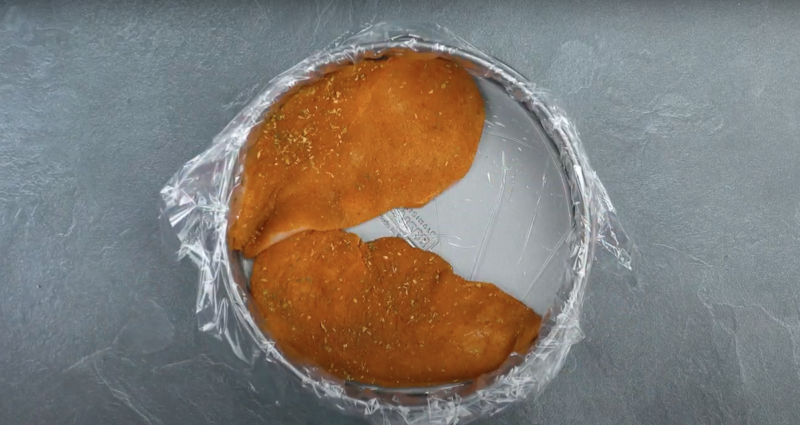 4. Put a layer of the fried pepper and onion mixture on the meat layer. 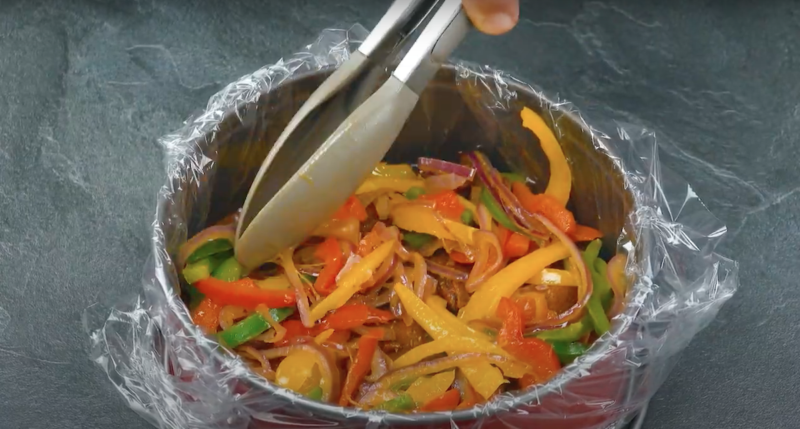 5. Sprinkle with a handful of cheddar cheese. 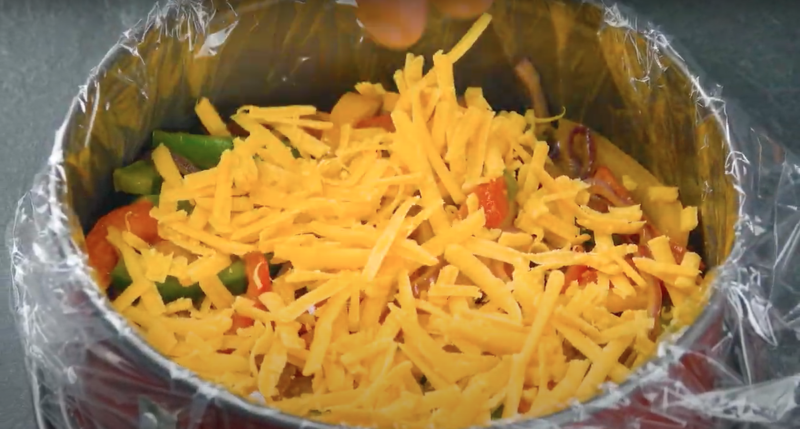 6. Repeat these 3 layers – marinated chicken fillets, roasted vegetables and cheddar – until all the ingredients have been used and the cake pan is nicely filled. Make sure you finish the layering with a layer of meat and cover the chicken fajita cake with cling film. Place the springform pan in the freezer for 2 hours. 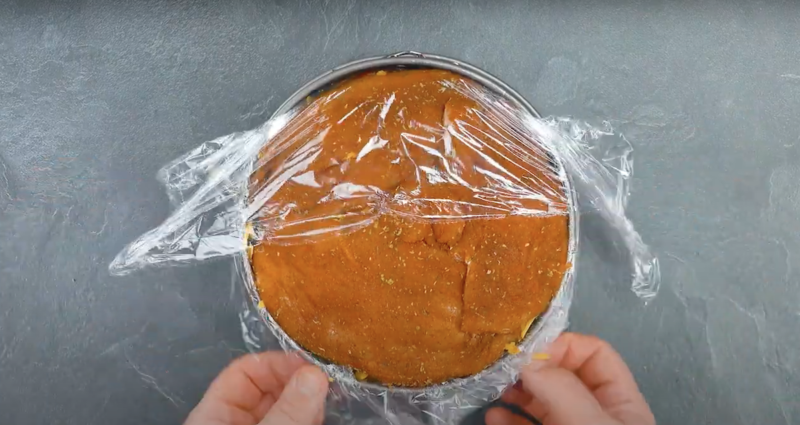 7. Take the cake pan out of the freezer and peel off the cling film from the cake. Make sure that the outside of the meat is frozen so that it is stable enough to be breaded. Prepare the eggs for breading by stirring them up and seasoning with salt and pepper. Then prepare one bowl with the flour and another with the panko breadcrumbs and bread the frozen chicken fajita cake by rolling it first in the flour, then in the egg and finally in the panko flour. 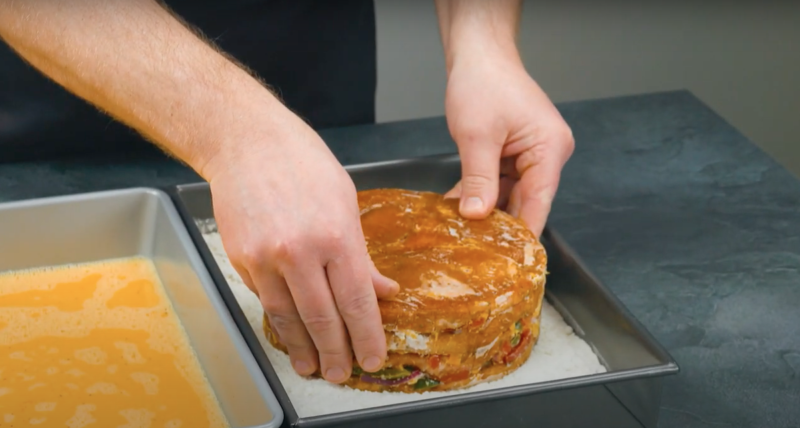 8. First deep-fry the breaded chicken fajita cake on both sides for 10 minutes each and then bake it for 60 minutes at 170 ° C fan oven. 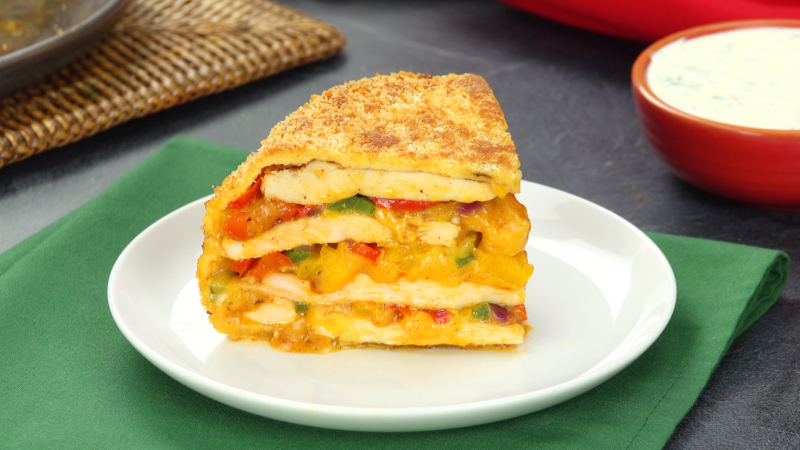 Although the traditional Texan-Mexican chicken fajitas – if they are well prepared – are hard to beat, we believe that this extraordinary preparation variant is in no way inferior to them! If you too are of the same opinion and would like to get to know another method of preparing chicken fajitas, then you should also try the following recipe: Fajita casserole with peppers, chicken breast and tortillas. Have fun!