Although South Korea seems relatively small next to China and Japan, nobody should underestimate the importance of the country. It is not only very successful economically, but also attracts more and more tourists. For example, while only around 5 million people visited South Korea in 2000, in 2016 it was already around 17 million.

Exciting and inspiring videos that make you think. (Scroll down to the article)

Anyone who wants to visit this country or are interested in Korean culture will encounter many strange customs, rules and traditions that make Korea unique. This includes the following thirteen examples:

1. Women (especially) cover their mouths when they laugh.

In Korea, it is considered polite to hide your feelings. Because the face reveals the state of mind most clearly, Koreans instinctively and reflexively hold their hand in front of their face or mouth in embarrassing, exciting or similar situations.

2. You can also spend the night in a sauna.

Korean public baths or saunas are called “Jjimjilbang”. They are open around the clock and also offer the use of whirlpools, steam showers, water basins, fitness rooms, cafes as well as rest areas with TVs and dormitories. An overnight stay costs four to ten euros.

3. Valentine’s Day is not only celebrated on February 14th.

“Pepero Day” is a Korean version of Valentine’s Day. “Peperos” are chocolate-covered biscuit sticks that are similar to the German Mikado sticks. The very young holiday has been celebrated nationwide on November 11th every year since 1996. Couples and young people in particular give each other the sweet chopsticks as a token of mutual affection.

4. In South Korea no Barbie dolls are sold, but dolls from Korean pop stars.

Korean pop singers, also known as K-pop, are so popular that you can buy small replicas of them in a number of stores.

In Korean hospitals you can enjoy typical Korean cuisine. For example, clam soups with marinated rice, vegetable pancakes and kimchi are served there. Always better than a piece of dry bread with cheese.

6. Those who are in a relationship rarely have friendships with members of the opposite sex.

Many Koreans believe that men and women cannot be friends with each other. Those who are in a relationship tend to avoid friendly contact with the opposite sex.

7. Parents spend a lot of money on their children’s education.

Even before studying at a Korean university, which incurs semester fees of the equivalent of more than 3,200 euros to 10,000 euros per year, many parents spend considerable sums on tutoring. Many students go to so-called “Hagwons” after school. These are private tutoring centers, the visit of which is estimated at EUR 300 to EUR 700 or more per month.

Due to the high work and performance pressure in school and later in the company, Koreans have relatively little time to sleep. Many compensate for this by taking a nap on the train or bus. Koreans can sleep virtually anywhere and in any condition. 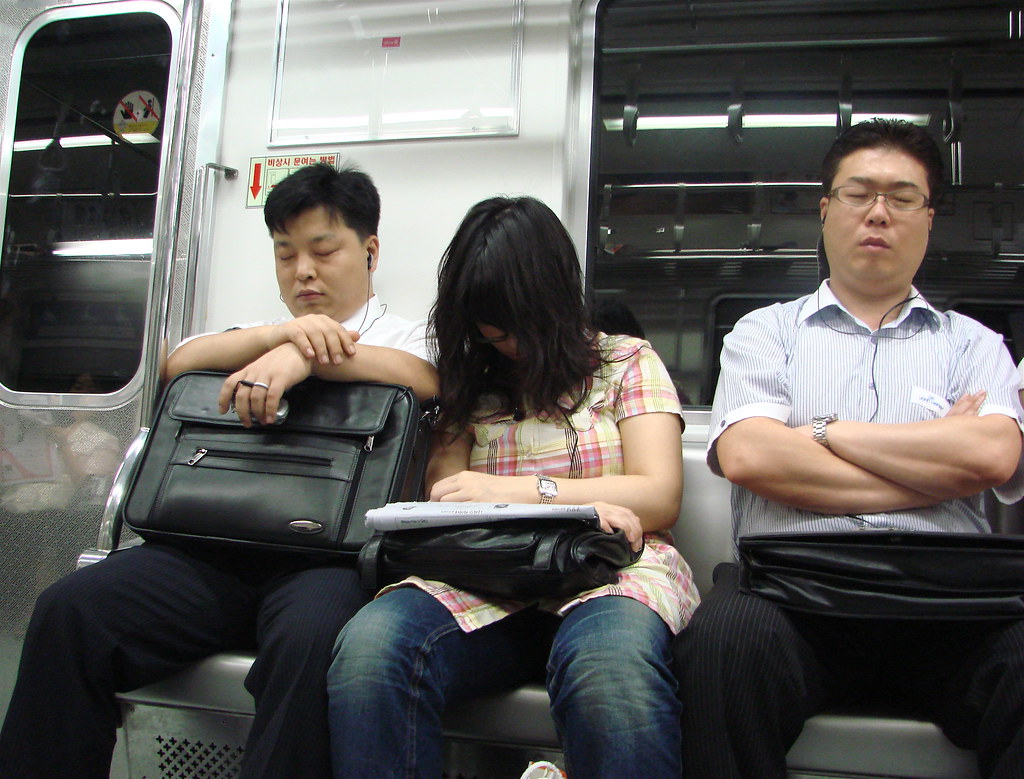 9. V and S lines are valued in women.

The “V-line” means a pointed chin. According to the Korean ideal of beauty, men and women appear more attractive and elegant. The “S-line” basically means the stature of a woman, a slimmer variant of the hourglass figure. When a Korean says that a woman has beautiful V and S lines, it means that he likes her chin and body.

10. In Korean families, the mothers are still almost exclusively responsible for bringing up children.

In Korean families, the fathers often work and the mothers raise the children. In traditional families in particular, great emphasis is placed on etiquette and good manners.

11. All drivers are required to take alcohol tests.

In the evening, often on Friday or Saturday, Korean police block a lane in certain places and check all drivers except taxi drivers. Anyone who sees a patrol car has to drive up, open the window and do an alcohol test. Fines are paid depending on the alcohol concentration in the blood: At 0.3 to 0.8 per thousand, the equivalent of up to 3,800 euros is due.

12. Koreans know how to deal with rain.

Although Korea is much further north than India or southern China, the country is still affected by the monsoons. It rains frequently and intensely, especially between June and September. Floods sometimes occur during this time. But that doesn’t impress a real Korean.

Many Korean women put blankets on their laps even when it is warm. Whether in TV shows, cafes, restaurants and other public places – this phenomenon can be observed everywhere. Koreans do this especially when they are wearing a mini skirt. They want to protect their private parts, as some members of this K-pop girl group do in the following interview.

Very interesting! South Korea is a fascinating country and really worth a vacation trip. And if you’ve ever been to East Asia, it’s also worth taking a trip to the Land of the Rising Sun to see these sixteen things that are probably only there.

But watch out: those who are above average will have to take care of their heads in Japan. Of course there are all kinds of curiosities to discover not only in Asia. The whole world is diverse, as these lovers, wedding dresses and crazy laws prove.